The Flowered Shar-Pei played a very important role in the development of the breed in America from the beginning.Now that breeders and buyers are becoming more educated about the flowered shar pei people are coming forth with the most beautiful and unique peis anywhere.

Many breeders wonder what in the world happened when their litter has a Flowered Shar-Pei.Where did it come from? Reports show that after 8 to 15 generations of breeding the Shar-Pei in America the Flowered Shar-Pei become a very noticed part of the breed.

The “flowered or spotted gene” is documented throughout the official Chinese Shar-Pei stud books beginning with the very first Shar-Pei ever registered in America and continues to appear regularly throughout the decades. The variation originated in China and plays an integral part of the breeds development in the States, strongly influencing the gene pool of the foundation stock. Nearly 90% of today’s’ Shar-Pei can be traced back to one or more of the very first 20 Shar-Pei registered with the parent club, The Chinese Shar-Pei Club Of America ( hereafter referred to as the CSPCA) and literally all of today’s Shar-Pei carry the flowered gene somewhere in their pedigree.

Flowered or spotted Shar-Pei is a dog with at least a 3/4 solid colored head, carrying an inverted ” ^ ” design toward the rear of the head. The body is at least 50% white with patches and ticking of the same color randomly distributed over the rest of the body. The Flowered Shar-Pei can be found in virtually any color as a solid Shar-Pei including sable and blue. The pattern of the Flowered Shar-Pei today can still be identified as the same pattern found on Down Homes Sweet Pea born in 1973, a Hong Kong Shar-Pei sent over by Hong Kong breeder Matgo Law and sire to the first Shar-Pei dog registered in the United States. There is no other breed today marked exactly like the Flowered Shar-Pei.

Since the flowered gene is recessive in relation to the solid color gene, and both sire and dam must be carriers of the gene in order for a physically flowered Shar-Pei to be produced from solid colored parents. Two flowered Shar-Pei bred together could produce a whole litter of flowered offspring, if no other dominating factors were present

Why the BearCoat and is this the coat for me

The bear coat Shar Pei has a long, soft coat, which contrasts with the short, coarse coat of most Shar Pei dogs.They owe their coat to a recessive gene that originally came from Chow Chows.Normal Shar Pei dogs have two recognised coat types: the horse coat, and the brush coat.

A bear coat is longer and softer hair than the standard Shar Pei.You won’t find the term “bear coat” in the official breed description for the Shar Pei.While a furry coat is appealing to many people, it is not a coat type that is recognized by the major dog breed organizations.

Like coat color, a dog’s coat length and type (softness, curl, etc.) are determined by genetics.The long, soft fur of the bear coat for this breed is the result of a recessive gene.If both parents are carriers with normal coats, their puppies have a 1 in 4 chance of growing a teddy bear coat.Puppies have a greater chance of inheriting the bear coat if one parent is a bear coat Shar-Pei and the other is a normal-coated carrier of the bear coat gene.If two Shar Pei with bear coats have a litter of puppies, all of them will be bear coated too.

Breed experts report that when the Shar-Pei was on the verge of disappearing in the mid-20th century, some of the few remaining Shar-Pei were interbred with the Chow Chow.The Chow is also an ancient Chinese dog breed.It has a very thick and dense double coat.Dog breed organizations only recognize the traditional horse and brush Shar Pei coat types that show no signs of the Chow influence.Despite this lack of official recognition, many fans of the breed find the bear coat Shar-Pei very attractive and are eager to seek out this rare dog.Does the recessive gene that causes the bear coat have any influence on a Shar-Pei’s health and temperament?

The link between coat and personality is less well established.Most experts say that a dog’s personality is not influenced by coat color or type.It’s more likely that our perceptions of dogs’ personalities are influenced by their coats, such as the idea that black coats are more “scary” than other colors.There is no scientific evidence that the bear coat type has an influence on health or personality.There is some anecdotal evidence that the brush coat and bear coat Shar-Pei types have gentler personalities than the horse coat.

Strain GM. The Genetics of Deafness in Domestic Animals. Frontiers in Veterinary Science, 2015.

Some examples of the flowered Shar Pei 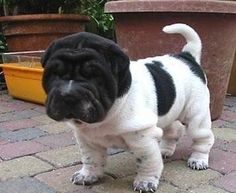 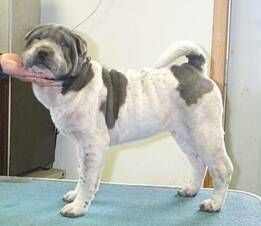 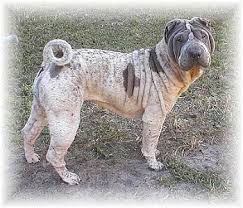 And of course our very own 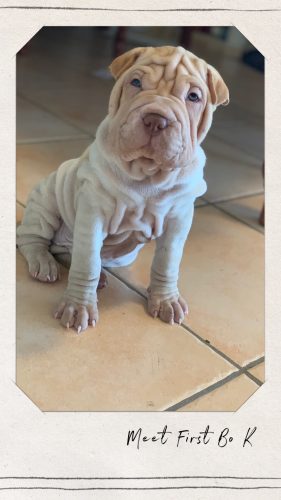 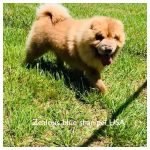 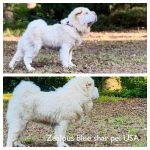 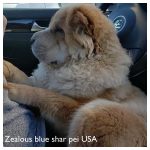 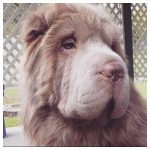 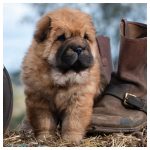