We do rigorous health testing on our dogs , these tests are part of  breeding scheme used in other counrtries though Shar pei breed clubs  . 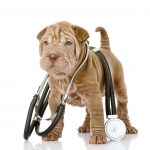 SO WHY NOT AUSTRALIA ?

I believe as a responsible breeder ,  Australian breeders should be performing these test on our Shar Pei’s before breeding. We want to do everything we can to give our families a healthy dog

Hip and Elbow scoring – This is done by taking Xrays of both the hips and elbows and having them scored by a professional radiologist. Hip and elbow dysplasia is  where the hip and/or elbow joints do not form normally, resulting in early onset arthritis and joint pain. The conditions are also genetic, meaning that they can be passed down from a sire and a dam to their offspring – but many less severely affected dogs show no symptoms until later in life, potentially after they have had many puppies.

Patellar Luxation – The dog is examined awake (chemical restraint is not recommended) and classified by the attending veterinarian according to the application and general information instructions. The veterinarian then indicates the results of the dog’s patella evaluation in an evaluation form

The patella, or kneecap, is part of the stifle joint (knee). In patellar luxation, the kneecap luxates, or pops out of place, either in a medial or lateral position.
Bilateral involvement is most common, but unilateral is not uncommon. Although the luxation may not be present at birth, the anatomical deformities that cause these luxations are present at that time and are responsible for subsequent recurrent patellar luxation. Patellar luxation should be considered an inherited disease.

Hereditary disease testing can allow for accurate diagnosis of disease status of your dog (clear, carrier or affected). Testing for hereditary diseases helps to create a clearer picture for the future health and happiness of your animals.

The foloowing tests  are  amongst an other 200 or so test that are carried out ,  we want to make sure our dogs can NOT pass any of these nasty disease on to any of our puppies born .

Canine degenerative myelopathy (also known as chronic degenerative radiculomyelopathy) – is a progressive disease of the spinal cord in older dogs. The disease has an gradual onset typically between 7 and 14 years of age. It begins with a loss of coordination (ataxia) in the hind limbs. The disease is chronic and progressive, and resulting in paralysis. This disease results in slowly progressive neurological disease that that is not painful and non-reversible. Dogs affected with degenerative myelopathy ultimately lose muscle mass from the disuse of their back legs and have difficulty getting up to go outside to urinate and defecate.

Primary Lens Luxation (PLL) –  is an eye condition that can cause irreversible blindness if left untreated. It is caused by the displacement of the lens within the eye of an affected dog. It occurs when the fibres that normally suspend the lens degenerate, causing the lens to detach. This disorder commonly occurs in both eyes of an affected dog

Progressive disorder of the retina (PRA) – inherited as an autosomal dominant trait due to a mutation in the gene for rhodopsin. Higher risk due to mode of inheritance. PRA is a retinal disease that causes progressive, non-painful vision loss. The retina contains cells, called photoreceptors, that collect information about light and send signals to the brain. There are two types of photoreceptors: rods, for night vision and movement, and cones, for day vision and color. This type of PRA leads to early loss of rod cells, leading to night blindness before day blindness.

Glaucoma –  is the result of high intraocular pressure, and if left untreated, can lead to pain and vision loss. The “angle” of primary open glaucoma (POAG) refers to the intersection of the cornea and the iris: this is where aqueous humor (clear fluid filling the eye) must flow to exit the eye. In open angle glaucoma, the iridocorneal angle remains unchanged, and other factors contribute to increased resistance to outflow.

Cardiomyopathy – is the most common acquired heart disease of adult dogs. The heart has two heavily muscled ventricles that pump blood away from the heart. This disease causes progressive weakening of the ventricles by reducing the muscle mass, which causes the ventricles to dilate. Dilated ventricles do not contract and circulate oxygenated blood well, which eventually leads to heart failure.

Hyperuricemia – is condition causes kidney and bladder stones composed of urate. In most dogs, uric acid is converted to allantoin, an inert substance that is then excreted in the urine. Dogs with HUU have defects in the pathway that converts uric acid to allantoin. As such, uric acid builds up, crystallizes and forms urate stones in the kidney and bladder. Uric acid is an intermediate of purine metabolism. While hyperuricemia in other species (including humans) can lead to painful conditions such as gout, dogs do not develop systemic signs of hyperuricemia.

Polycystic Kidney Disease – is Cysts are abnormal, fluid filled structures that arise from the kidney cells themselves. As they grow, they take up functional space within the kidney leading to a progressive loss of kidney function.

Primary hyperoxaluria –  is caused by a mutation in the the AGXT genes. Loss of the enzyme product of AGXT, alanine-glycoxylate aminotransferase, causes an inability to break down glyoxylate leading to the formation of oxalate-based stones in the kidney and bladder.

Hypothyroidism – This a medically manageable condition that arises from an inherent inability to produce the hormone thyroxine (T4 and Free T4) . Current estimates suggest that one Shar-Pei in five is deficient in thyroid hormone. Thyroid hormone is important as it controls the metabolic rate for every cell in the body. Without thyroid hormone, everything just slows down, and the effects on the skin become most obvious. Hair loss with dandruff and pigmentation are common and often there is a “water line” pattern, a clear line of demarcation along the body below which the skin is irritated and above which the skin is normal. In general, this condition is not itchy but as the immune system is also slowed down, secondary infections that are itchy may result. If your Shar-pei develops skin disease of any kind, your veterinarian will probably want to check a thyroid level to make sure hypothyroidism is not involved.

SPAID – More commonly known as Familial Shar-Pei Fever, this autoimmune condition causes recurrent high fevers, joint swelling and pain, and overall malaise. Some Shar Peis will also develop amyloidosis, an inappropriate accumulation of an abnormal protein, amyloid, in the liver and kidneys. . This test is carries out in the US – Currently testing has been suspended please see link , once the university lis taking sample we will be sending the rest of our samples over  https://www.vet.cornell.edu/animal-health-diagnostic-center/testing/protocols/shar-pei-autoinflammatory-disease