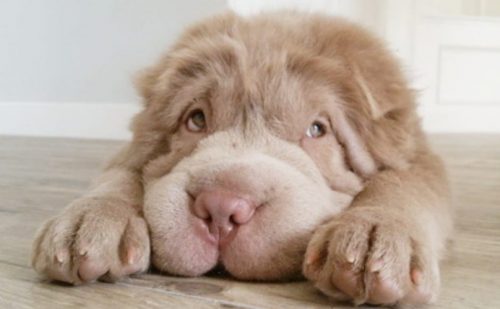 The Shar Pei is centuries old and is a cross of the mastiff and Nordic breeds. The blue tongue is a characteristic it shares with the Chow Chow and this breed too is also responsible for its make-up. The Shar Pei was originally considered a delicacy in China and the outlawing of them as pets on the mainland forced the breed into near extinction. Thankfully Matgo Law, a concerned breeder, was able to inspire interest in the Western world and the breed was saved. When Shar Pei first came across to America in the early 1970’s they classified as the rarest breed in the world

Shar Pei are easily recognisable by the loose folds of skin on their bodies and their ‘frowning’expressions. They are squarely built and short-coupled and look powerful with good bone. They are balanced dogs who should move freely and vigourously. Their coat is also a distinctive feature of the breed: it is short and bristly and harsh to the touch. Whilst it is straight and stand-offish on the body, it is flatter on the limbs.

The Shar Pei comes in different coat types – horse, brush and bear coat. The horse coat is rough to the touch and prickly and is thought to be closer to the original Shar Pei breed in coat type than the brush or bear variations of the coat. The brush coated variety has slightly longer hair and a smoother feel to it. The bear coat is long ( all those verries in length ) and is fluffy  feel to it

Dogs and bitches should measure between 46 – 51cms and weigh around 25kgs.

Dogs and bitches should measure under 46cms and weigh under 25kgs

It is important that prospective owners choose their puppy carefully from well-established breeders. Conformational defects as in upstanding ears and excessive skin and wrinkles can occur. Bowed legs, joint luxations, HD are also known. Excessive skin around the eyes can cause entropion. Kidney disease, IgA deficiency, amyloidosis and hypothyroidism have also been reported. Whilst skin diseases were a problem in the past, careful breeding has now eliminated these.

The Shar Pei is a member of the utility group. They were originally bred as gladiators in the pits for entertainment at night and for hunting, herding and protecting during the day. And also as a delicacy! Today they are used for companions and seen in the show ring. Worth noting is that there is no plural for Shar Pei.

Well-socialised Shar Pei make superb family dogs who are devoted to their owners and children. They are loyal, playful and active but can also be stubborn and territorial if not trained properly when young. They are naturally suspicious of strangers. They will be fine with cats if they have been introduced to them when puppies but there can be problems mixing with other dogs. They love being indoors and hate the cold.

Whilst highly intelligent, this breed does need consistent training and a confident handler. It will reverse roles if you are too soft, too uncertain or too inconsistent. In fact most of them are too stubborn to train!

Whilst an active breed Shar Pei will take as much or as little exercise as offered as long as they have access to free play. Care must be taken when they are off the lead and a well enlosed area/garden is a must.

Suitability as a Guard Dog